Yesterday was all about travel around here. I was confined to the back of two MD90s halfway across the country on what turned out to be a challenging weather day (not, apparently, as bad as others had dealt with earlier in the week, thank goodness!). My mechanic husband, on the other hand, made a 600 mile run northwest to do a pre-buy on a lovely Cessna 182 for some old friends. 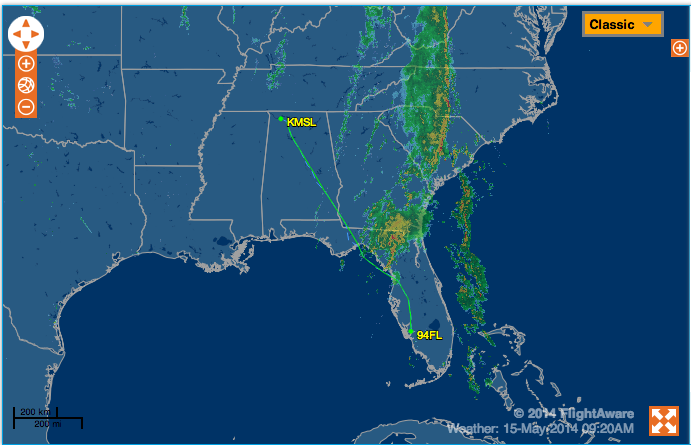 The guys left in the RV-10 early, and skirted the worst of the weather. That didn't mean they weren't in the soup at 10,000 feet. And then the iPad began to act up. It runs WingXPro 7, most current version, and it dropped the GPS signal completely. Who knows why? It wasn't a big problem, as the aircraft has two panel mounted GPS that worked fine.

Next the Nexrad signal painting on the MFD appeared to get confused. It showed the weather moving off to the east, and then on the next paint, showed the weather back right in front of them. Not comforting at all when you are in actual IFR attempting to circumnavigate the worst of it. They got kicked around a bit, but no harm was done. It was, however, one of the first times that ADS-B has let us down. Note to self: remember, it is only a digital signal, and delayed, at that.

you" machine. Turns out it had a Stormscope (not noted on the Trade-A-Plane ad) and a better autopilot than they'd thought. It also had cosmetic hail damage. Ouch. Fortunately, beauty is in the eye of the beholder. With a strong engine and good paint and interior, plus a WAAS GPS navigator, this bird was a good deal for the new owner.

This morning the RV-10 landed back home before noon, having had a quick ride with a decent push behind the cold front. The Cessna enjoyed the push, too. Flightaware pegged it at a blistering 155 knots as it tracked direct on its way here. Not bad for a 38 year old piece of hardware.

She's safe and sound in her temporary hangar (still a little bit of tweaking to be done, and a short list of squawks to go through). Her new owner? He made like Superman, swapping civi's for his airline uniform in the hangar, and hightailed it out to make his commute to work. Ah, the life!
Posted by Amy Laboda at 11:30 AM