The View From Above

One thing about me, wherever I go, whatever I do, if I haven't seen the place, experienced the country from the cockpit of a light aircraft, well, then, I haven't really been there. That's just me. So wherever I travel, if I can't fly there in my own aircraft, I work hard to uncover opportunities to at least ride shotgun with another pilot and capture that bird's eye view of the world from on high (but not too high up--that would be like an airliner!).

Why this compulsion? I've been flying in light aircraft since before I could read, and piloting them more than half my life now. I dream of being airborne, floating on air currents the way I flew through lava pinnacles and chutes when scuba diving in the Pacific. I see the ground rushing past me as when I've skydived. And clouds—anyone who has flown the gauntlet of towering cumulous midday in Florida en route to home before they overdevelop into dreaded cumulonimbus knows the thrill. Climbing and sinking to get around a craggy outcropping, weaving a path while always straining for ground contact, the heat-soaked, limp, languid, humidity of the afternoon left ever so far below you. I love it.

I can remember these gold and green fields of Stellenbosch, South Africa, glowing in the buttery late afternoon light of a springtime. The pilot, Marc, offered to take my husband and I for a ride around the Cape Town area in his relatively new RV-10. Robin Coss, of Coss Aviation, a builder of Van's Aircraft,  hooked us up with him. Marc's hangar at the tiny Stellenbosch Aerodrome (good luck finding
it on a map—use Google Earth) was a pilot's paradise, with rare motorcycles tucked in behind the beautiful blue and white RV-10's wings. A classy bar was tucked into a corner for after-flying libations, too. 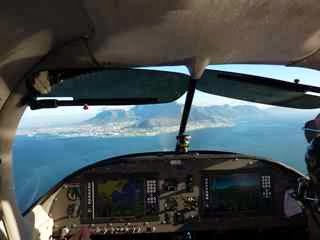 We pushed the airplane out into the warm afternoon light and clambered up into our seats. The bright MGL dual screen system came to life and Marc cranked the Lycoming up front. We were off shortly thereafter, heading toward Robben Island, where Nelson Mandela and other political prisoners were held in the apartheid years. From there we turned east, and headed toward Table Mountain, which defines the geography of Cape Town. We skirted the massive mount, weaving our way out toward its point, then around past Simon's Town, Muizenberg and down the beach low, at the request of ATC, dropping under the traffic landing at the international airport.

From there we zoomed up and over the Kogelberg Nature Reserve, dropping down again off the cliffs at Hermanus, where a mother humpback whale and her calf surfaced as we circled, watching us as intently as we watched them.

We broke off after a couple of circuits, not wanting to disturb them much, and with the sun sinking on the horizon anyhow. Zooming back over the cliffs at Hermanus I looked off to see the ever pervasive tendrils of fog stretching from the cap cloud on Table mountain, rushing toward the beaches as the air cooled in the late afternoon.

Sure, I'd driven this entire route in the weeks before this flight, but in just one hour aloft I'd finally seen it—I mean really seen it—and began to understand the diversity and complexity of such an amazing, blessed, cursed, blessed country. That flight made me want to understand it better, know it's people, be a part of it's survival. You don't get that from your seat in row 27. Not even if it's a window seat.
Posted by Amy Laboda at 12:53 PM